Thomas, chemo and me… 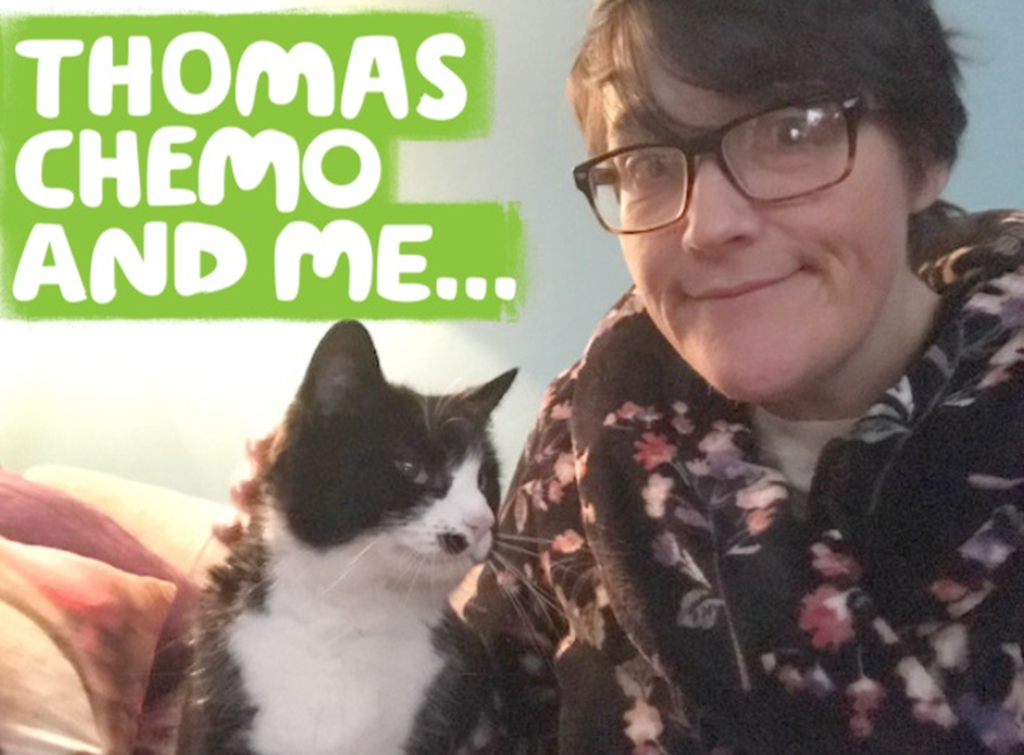 When Becky tweeted that her cat Thomas had helped her through her chemotherapy treatment on #worldcatday, we needed to find out more. Here, Becky, who was diagnosed with colerectal cancer with metastatic spread to her liver in 2015, tells how a black and white cat called Thomas has helped her through difficult times:

You said that Thomas had helped you through “some tough chemo sessions”?  How did he help you?

During my chemo my friends and family had developed a rota so that I would have someone with me most of the time! most of my friends work shifts and so it wasn’t always possible for someone to be with me and that’s when Thomas stepped in!

He wouldn’t go outside and was always ‘cwtched’ up to me. His fur is soft and comforting like a teddy bear and his body heat would replace the need for a hot water bottle which helped ease the discomfort of the neuropathy in my hands and feet.

I love my family and friends they have been so amazing through this whole journey, but my time spent with Thomas was peaceful and quiet. No ‘drink this’ ‘eat that’ ‘don’t do that’, I know they cared and they felt like they were helping. His purring just mesmerised me it soothed me and helped me to relax. Both of us content in each other’s company

Because of your cancer you had to undergo surgery and sometimes it was painful to have Thomas on you. Do you think he began to reaslise that he had to act differently while you healed, or did he have to be reminded?

Thomas is such a loving cat and sometimes he just can’t get close enough to you! So he would need constant reminding that he couldn’t lay on my stomach but he would quickly find another little part of me where he could curl up.

Does Thomas behave any differently towards you now?

I guess he does, I am the only one he will allow to pick him up to cuddle him. He rests his paws on my shoulder and I nurse him like a baby!!

Thomas found you didn’t he? Tell us how he come into your life?

Before Thomas we had a cat called LuLu. She was a grumpy old cat and wasn’t really a people person, but we loved her all the same. One day Thomas appeared in our back garden. He looked cared for and so we just though he was a local passing through.

Over the weeks he would be spotted in the garden more frequently but would often be chased away by LuLu! We started to leave little titbits for him as he would stare through the backdoor watching LuLu eating and he looked a bit lost. LuLu was old and frail and day by day was fading, sadly we had to take LuLu to the vets to be put  to sleep.

Thomas was still paying us regular visits and eventually we decided we would take him in! He is such a character and has a wonderful way of letting us know what he wants/needs, for example if he wants to go out he will jump up in front of the TV and sit there until one of us gets up and then he leads us to the back door! Im certain he talks to us too!!

And the tough one… in three words… what did Thomas mean to you / give you when you were undergoing your treatments for cancer?