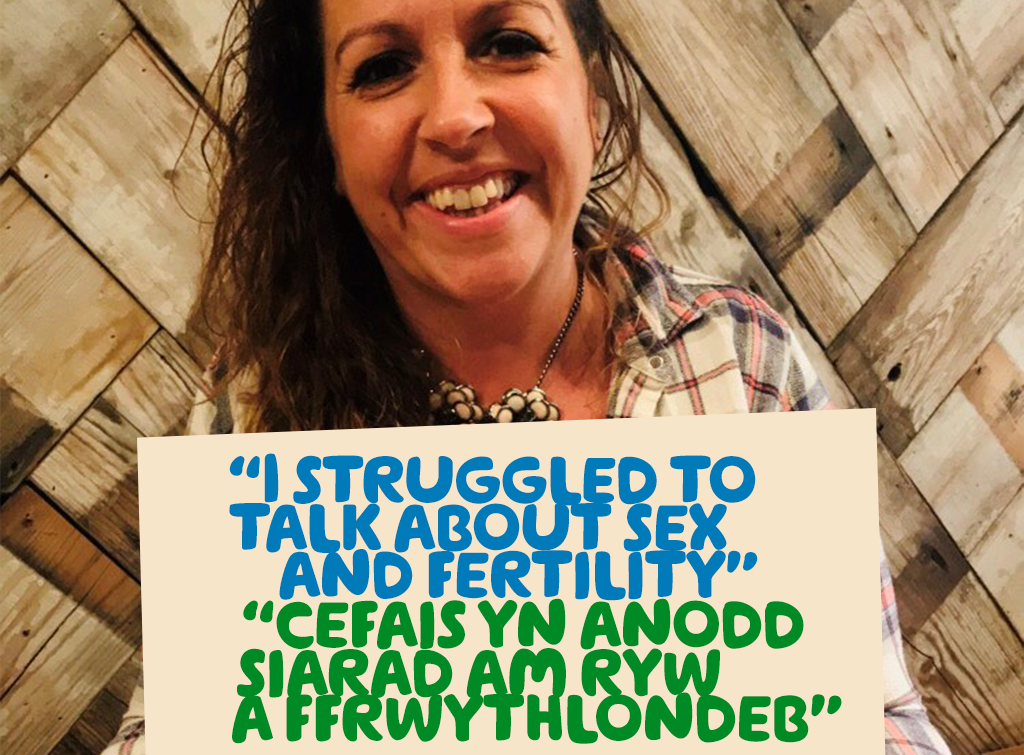 The greatest impact of cancer is often not the treatment or the illness itself, but the life-changing side effects it can leave behind.

In our latest blog series, we tackle the ‘taboo’ subjects that every year leave thousands of people with cancer either too worried, or too embarrassed, to ask for the help they need.

A recent Macmillan poll suggests that sex and relationships are the number one taboo issue in Wales, with over half of people saying they would find it difficult to talk about.

Ali was diagnosed with cervical cancer in 2015.  She explains how her sense of loss over her fertility, and worries about intimacy, weighed far heavier than her cancer diagnosis.

Ali: In 2015 I attended a routine smear test.  It led to me being diagnosed with cervical cancer.

It goes without saying that nothing can prepare you for the moment you hear those words “you have cancer.” I know for sure that I wasn’t ready for it.

But through all the tears – the being strong for others, and the private moments of falling apart – the impact cancer had on me is probably not what people would expect.

And I guess it all started right at the point of diagnosis.

Firstly, I was lucky.  There was a treatment option available for me, and I’ll be forever grateful for that.  I am now a four-year survivor.

But when my treatment option was presented to me, I don’t think the impact of what it would actually mean for me was ever really talked about.

I had to have a hysterectomy.  That’s no small thing.  Not for someone like me who had always been so very sure I was going to have another baby.

But I was 37, single, and I already had a son who was the whole world to me.  I guess it was assumed that I would be fine with the treatment, and all it would take away.

They couldn’t have been more wrong.

The most painful impact of cancer wasn’t the illness, or the treatment, or the worry.  It was the thing that was never talked about – my freedom of choice and the hope of a future child that my cancer treatment would take away from me.

It wasn’t talked about, it wasn’t reasoned, considered or weighed up until I met my Macmillan nurse Jane, who with a human touch helped create the space for me to come to terms with it.

And it didn’t stop at my sense of loss over my fertility.

No one really talks about how a treatment like a hysterectomy actually makes them feel, or about the effects it can have on relationships, on their sex life and on their self-esteem.

On one hand I was elated that my cancer treatment was successful, but on the other I was so weighed down by what I felt I had lost.

For me I began to feel like less of a woman somehow, that I had lost my femininity.

Reflecting back, I even started doing things like wearing full make up every day, investing in false eye lashes and fake tan – all to try and compensate for a part of me that I felt I had lost.

My confidence with relationships was ruined and the idea of meeting someone new was terrifying.

I couldn’t help but ask myself questions like “would men see me as less of a woman, would they be attracted to me now, and would me not being able to have children be an issue for them?”

The thought of sex was nerve-wracking.  I worried whether everything would still work down there, would it be painful, would there be any embarrassing side effects to worry about.

Following advice from my Macmillan nurse, I underwent counselling which helped regarding my fertility.

I only really got my answers to my questions and worries over intimacy when I met someone new – and I’ve never felt so self-conscious or scared in my life.

I’m four years on and if I could have anything, it would be for no-one to find themselves in that same lonely position.

No-one should be wracked with questions they are too self-conscious to ask, or in need of support they are too embarrassed to seek out.

We do need to be more open and honest.  If cancer has taught me anything it’s to take life by the horns and to live it as fully as I can.  If I was bubbly before, then I’m unstoppable now.

All these issues like sex, intimacy, money, emotions and mental health – these are not taboo.  They are the everyday, they are the natural things that we all need and worry about.

It was only when I talked things through, when I began to square away some of the things that cancer had taken away, that my healing process really began.